Wilson - 10/9/2020
In the early 1950’s Cold War tensions between the United States and the then Soviet Union.  Concern over a potential "Bomber and Missile” gap between the US and USSR intensified.  How could the US learn about the perceived bomber and missile gap?  There were no satellites that could overfly nor human assets inside the Soviet Union that could help determine this.  A plane that could fly so high that it might evade enemy radar and be difficult to shoot down was required.  A Top-Secret Project "Aquatone” was created.

"Aquatone” was the project codename for the development of the U-2 aircraft.  Funded by the CIA, this aircraft was so unconventional in design, it was not built to military specification.  Instead, performance specifications were used.  At that time, it was nicknamed "Angel” because of flight at high altitude.  Kelly Johnson, head of Lockheed’s Skunkworks was to build the aircraft since it had such success with the P-80 Shooting Star in secrecy. 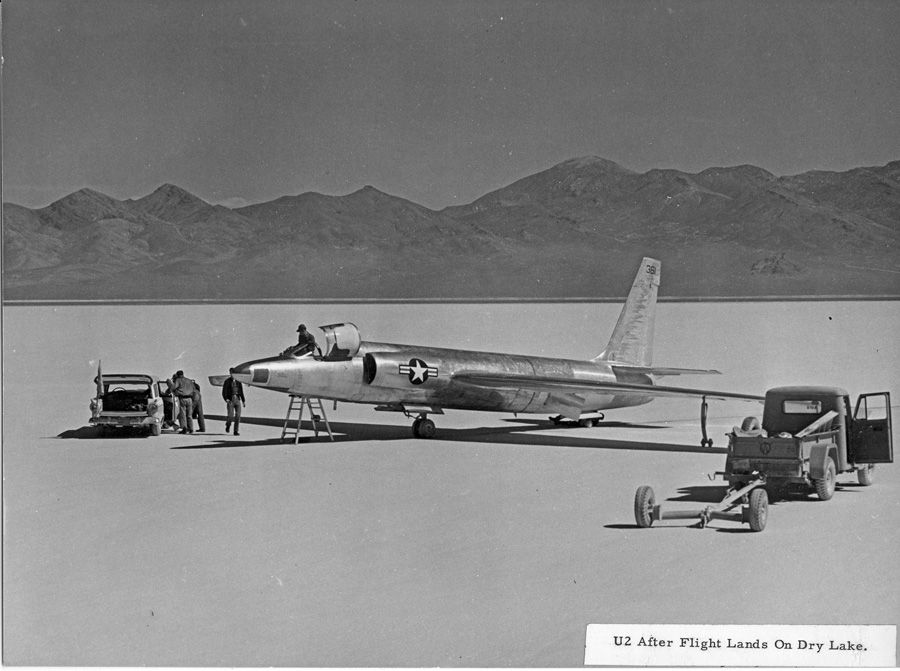 But where could this Top-Secret project be developed and tested?  As work progressed by Skunkworks on the airframe, on April 12, 1955, CIA’s Richard Bissell, AF Colonel Osmund Rickland, Lockheed’s Kelly Johnson flew over Nevada in a Beechcraft plane piloted by Lockheed test Pilot Tony Levier.  They were in search of a remote and isolated location to flight test the "Angel.” A salt flat area known as Groom Lake was spotted.  This area was near the NE corner of the Atomic Energy Commission’s (AEC) Nevada Proving Ground.  Levier put the plane down on the lakebed near what appeared to be an old landing strip.  The area was at one time used by the Army Air Corps as an aerial gunnery range.  The team egressed the plane and walked over to the old landing strip.  They took a closer look and found that it was made of compacted earth and had turned into dust that was several inches deep after years of unused. They could not have made a safe landing on that strip.

The team all agreed that this isolated location would be an ideal site for testing the "angel” and training its pilots (often called Drivers by the CIA).  President Eisenhower approved the use of the strip of wasteland (AEC had to annex it) which was known by its map designation as Area 51, to the Nevada test Site.

This location acquired various names.  First by the Area 51 map designation. But, for the pilots and workers who would reside there, Kelly Johnson called it "Paradise Ranch,” with that being shortened to "The ranch.”  Many of the workers referred to themselves as "ranch hands.” Area 51 was also known "Watertown” which was rumored to be the birthplace of CIA Director Allen Dulles, Watertown, NY.  But Records show that the name often was a reference when runoff of rainwater from the mountains nearby would flood the dry lakebed.  When that happened, the "ranch hands” referred to it as the "Watertown strip.”

Groom Lake was also associated with the name "Dreamland.”  According to TD Barnes, President of Roadrunners International (an association of former Air Force, CIA, and contract personnel serving at Area 51 during the Cold War), Dreamland was a radio call sign for the base that surfaced in the 1960’s.

The primary access to Area 51 was by aircraft.  This was for security reasons.  A C-124 would transport the parts and aircraft components of the U-2 from Skunkworks at Burbank to "Watertown,” for reassembly and testing.  A daily air shuttle would transport the workers and other cargo between Skunk Works and Watertown.

However, the U-2 was not the only CIA aircraft that was transported, tested, and flown out of Dreamland.  In 1962 the CIA’s A-12 OXCART flight test took place there.

According to the CIA News and information page, "CIA, Air Force, and private industry personnel from many specialties helped make the U-2 a reality and several lost their lives in the process (while at Area 51). Four of those were pilots who had known the risks of handling an aircraft that was difficult to fly, even in the best of circumstances. Fourteen members involved in the U-2 project also lost their lives when their transport plane enroute from Burbank to Watertown crashed during bad weather into Mount Charleston, a few miles outside of Las Vegas.”

"It was the sacrifices these pilots and U-2 project personnel made for the United States, helped win the Cold War. Along with thousands of Americans worked at Area 51, their patriotism, ingenuity, and willingness to take on project critics believed to be impossible at the time -the creation of the U-2 – allowed the US to penetrate the Iron Curtain and gain an unparalleled advantage over the Soviets in intelligence gathering.”

Menu
Home
About Us
Membership
Store
News
Contact Us